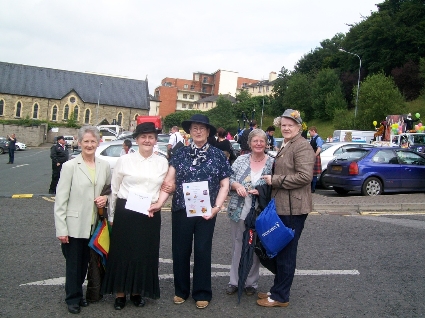 Cavan Federation was founded in 1953. Dorothy Smith who was a founder member in Cavan Guild and federation president went on to become National President in 1958-1960. Phyllis Faris who was a prominent figure in ICA in Cavan and at national level set up a Fund in memory of Dorothy Smith following her death. This was called the Dorothy Smith Bursary and Guilds contributed to this fund, the money invested to provide two half scholarships to An Grianán annually which is raffled among the Guilds.

Phyllis Faris presented the Friendship Bowl to the Federation to develop public speaking skills and an annual competition is held for this prestigious bowl every year.

We actively promote issues relating to women’s health. We are members of Cavan Women’s Network, Cross Border Women’s Network and get involved in projects with members of the Women’s Institute of Northern Ireland. As a border county the hand of friendship on our federation’s part is always outstretched.

If you are interested in joining or setting up a Guild in Cavan please contact Kathleen Farrelly on 0868590927 or cavanpresident@ica.ie and she will put you in touch with a Guild that shares your interests.

Our activities include art, crafts, cookery, quizzes and recreational activities. We also organise classes in painting, computers, calligraphy, flower arranging and effective speaking. Members, whether old or new, novice or experienced, are welcomed at all events and encouraged to take part.

Over the course of a year we have regular competitions. The Manor Cup which incorporates a different theme each year allows all members to show off their expertise whether it be knitting, sewing, flower arranging, baking or some other skill. The Friendship Bowl is presented annually for poetry reading or impromptu speaking based on a given list of topics. Guilds also participate in the “Skills of the Year” competition at Virginia Show which uses a different theme each year. The Kathleen McCabe Cup for Flower Arranging is also held in the autumn. Members take part in an annual Charity Walk raising funds for Cancer Homecare. These are very well supported and are extremely popular.