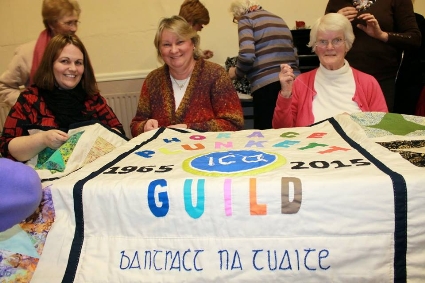 The ICA is the largest women’s association in Ireland, with circa 6,000 members and over 440 Guilds accross the Country. We cook, travel, craft and socialise!

The aims of the ICA is to provide a welcoming and fun organisation which offers support, friendship, personal development, education and life long learning.

Our members regularly learn new skills, participate in local charity initiatives and get involved in their local communities. As a member of the ICA our structure means that your voice is heard locally, in your county and nationally as we work to ensure that women’s interests, family policies and community values are at the forefront of Government policy both nationally and in county councils locally. We build on 110 years of nurturing the Irish Language and culture and we ensure that through teaching and practicing that we preserve the long tradition of heritage crafts that we are so proud of in this country.

The objectives of the Association are to bring women together in fellowship and through co-operative effort, to develop and improve the standard of rural and urban life in Ireland having due regard for our Irish culture and to encourage the use of the Irish language in the affairs of Bantracht na Tuaithe.

DONEGAL Federation President to be announced

LONGFORD Federation President to be announced

OFFALY Federation President to be announced