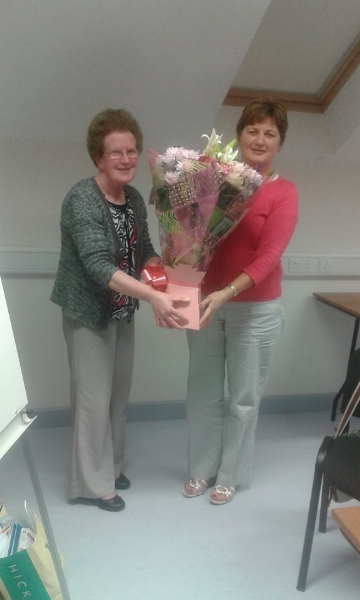 In 1939 Alice MacEoin invited some of her women neighbours to her home at Garvagh, Ballinalee with a view to forming a branch of ICA in the area. The meeting was a success and so the first Guild of ICA in Longford was born. The Association gradually spread to other areas and first records from the Federation minutes show that by 1947 there were guilds in Lenamore, Killashee, Melview, Kenagh, Clonahard, Ballymacormack and Knockloughlin. Some idea of those early meetings can be gleaned from the following recollections of an early member.

“I joined the Lenamore Guild in the early 1950’s. There were between 30 and 40 members in the Kilglass Parish Hall – a corrugated iron structure with interior timber lined walls and ceilings. Dedicated honorary secretaries arrived 15 to 20 minutes before starting time to “open up” and cope with temperamental tilly lamps and oil stoves. These had to be filled with paraffin oil and wicks had to be trimmed before a match was put to them. The hazards of setting fire to the woodlined walls did not seem to cause near insolvency which would arise today with insurance costs. If tea was on the agenda the urn had to be filled with water from the village well and then swung into place over the reluctant flames.

The ICA was a negotiating agency for VEC adult education classes in cookery, dressmaking and carpentry and these were availed of widely. Very importantly women learned through the ICA handbooks (still available today) and from talks and training courses how to elect Guild officers and how to conduct meetings in a business like way when decisions made and recorded could be upheld at future dates.”

From a very early date there was involvement with Longford Show, an involvement that still continues to this day. A Council meeting, attended by delegates from all over Ireland was held in the Temperance Hall on 10th and 11th February 1950 and another one was held in 1989 in the Fountain Blue where 400 – 500 women attended.