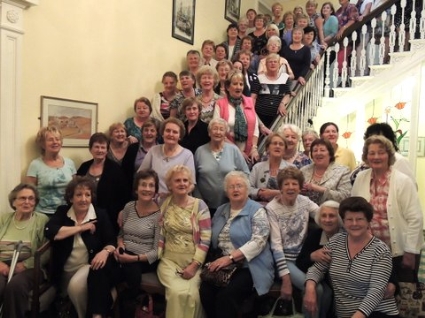 South Tipperary Federation was founded in 1941 and rich in ICA history including the first ICA Summer School on the slopes of Slievenamon in 1929 – an enterprise that led, years later, to the foundation of our ‘all-year round’ Adult-Education College at An Grianán.

Among the first pioneers of that first school on Slievenamon was the late Alice Ryan of Knockarron and Emly Guild, who was National President of ICA from 1952 to 1955.

Phyllis O’Connell joined the Fethard Guild in 1933 and went on to become Chief Organiser in 1943, having served as county and local organizer meantime. Her dedication to her task is proven by the recording in the minutes of Emly Guild in 1945 that “Phyllis O’Connell travelled from Fethard (to Emly) by bicycle to attend a meeting (over 30 miles). In the early days of her outstanding work the bicycle was here usual mode of travel to outlying areas. Later she covered the country by car. She and her sister Helen were experts in the art of Lumra-rug making (their father Dr. O’Connell hired a New Zealander, who was teaching the craft in England at the time, to come and teach his daughters).

If you are interested in joining or setting up a Guild in South Tipperary please contact us.

Our activities include crafts, community development work and representation at national level. Craft workshops are held in the Museum in Clonmel and in the Cashel Library. Our members support the Clonmel Show and the Clerihan Food Festival

Annual Federation Day – showcase of Guild activities including crafts and produce – this is not a competition.