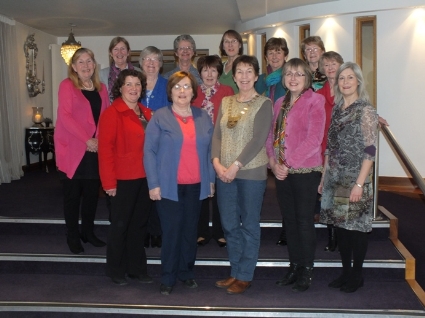 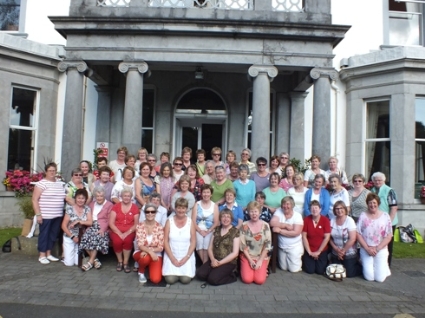 A conversation on a train journey from Dublin to Enniscorthy in 1908 was the starting point that was to led to an all Ireland Organisation whose objective was the social and economic development of rural Ireland. The conversation was between Mrs Anita Lett and Mrs Alex Rudd and the organisation to emerge was the United Irishwomen later to become known as the Irish Countrywomen’s Association.

The Irish Countrywomen’s Association was founded in May 1910 by a small group of well educated women in Bree, Co Wexford. Its aim was “to improve the standard of life in rural Ireland through Education and Co-operative effort”. The organization was non-denominational and non-party political, principles which continue to this day.

At that time, life for women in rural Ireland was one of hardship and drudgery and the ICA set out to offer friendship, hope, support and leadership. Early initiatives of the organization included encouraging and educating members in vegetable growing, poultry and egg production, bee keeping, fruit bottling and cheese making. This aim improved health through better diet and nutrition, with the added benefit of an opportunity for women to generate an income from their surplus produce.

There was a strong focus on health, an area of major concern in rural Ireland. ICA members were sent to England to do basic courses in nursing and Nurses’ Cottages were set up to demonstrate health care, hygiene, nutrition and patient care. To help combat high levels of tuberculosis, goats’ milk depots were set up, goat’s milk being TB free, and by the 1920’s the society had a goat farm in Co Wexford which supplied goats to other districts.

In 1935 the Society of the United Irishwomen changed its name to the Irish Countrywomen’s Association and by the late 1940’s the ICA and the Irish Homespun Society had jointly organised Country Markets. This was an outlet to help Ireland’s small producers and traditional craft workers organise the co-operative marketing of their home produce and crafts.

At a time when women tended to have little or no formal education, the ICA hosted annual summer schools in different venues across Ireland, until in 1954 when the ICA Adult Education College at An Grianán was established. A wide variety of activities took place at An Grianán, everything from practical classes in dressmaking, winemaking, cookery and dairy farming to workshops in public speaking and performance of music and drama. In 1968 An Grianán set up a co-educational Horticultural College which taught a wide variety of demand led courses such as green keeping, floristry, and the use of pesticides.

In the 1950s life in the farmhouse and in rural households revolved around daily chores. Heating and cooking was dependant on solid fuel or timber and turf and water had to be drawn from an outside source. Rural electrification was rolled out and its availability in the home and on the farm eased the workload of many women. The “Model Farm Kitchen” a labour saving kitchen with modern electrical appliances, was the culmination of a series of kitchens designed by the ICA to help women to adjust to cooking on an electric stove.

In the 1960’s water was still a major concern for women living in rural Ireland. Many homes still relied on outside pumps and there was opposition to extending water systems into homes. In 1961 the ICA organised a successful “Turn on the Tap” exhibition at the Mansion House and a Conference on rural water supply at An Grianán Co Louth. Group water schemes became ICA’s primary focus for discussion and action in the early 1960’s with the onus being shifted from central government to local authorities.

The ICA has been instrumental in providing practical support in the development of basic utilities in Ireland, such as water and electricity, and in influencing policy in health, education, adult education, agriculture, horticulture, arts & crafts, and on a range of other issues.

We provide educational and recreational opportunities on a voluntary basis for our members at local and county level, and have been doing so for one hundred and four years. Our founding principles as articulated by Mrs. Anita Lett, our Founder, are “Better Living” and “Deeds not Words” and these principles guide all our work for the improvement of life for women and their families.

At county level there are regular Federation Meetings (five per year), One Day Craft Schools, Irish Evenings, Trips to Shows. There is also a three day holiday organized each year.

At local level Guilds organise outings and classes to suit their individual requirements from First Aid to Flower Arranging, from Painting to Pilates and Pottery and from Bowling to Ballroom dancing.

Twice a year we travel as a group to our Adult Education College, An Grianán, in Termonfeckin, Co Louth where we meet up with old friends and new to learn crafts and other new skills and dance the night away. There is a bar in the College and a well-stocked Garden Centre in which to buy a memento of our visit. Members and Guilds also organise their own individual visits at other times.

We completed the Making IT Even Better computer project and we had beginner computer classes for 160 members in various venues throughout the County.

In 2012 we launched our History Book “102 Years of Wexford ICA” a book of photos and Guild highlights from Guilds both past and present. The book was written by our members and compiled by Mary Somers our Competitions Secretary. The book was launched at the National Ploughing Championships which were held in Heathpark, outside New Ross, Co Wexford in 2012. It is available by contacting any committee member at a cost of €10 plus postage.

As 2013 was the year of “The Gathering” – ICA in Co Wexford got involved and invited a group of Women’s Institute members from Pembrokeshire Federation in Wales to visit us for a short break. The ladies stayed with ICA hosts and travelled each day to many of the tourist attractions we have in Co Wexford including visits to Hook Lighthouse, the beautiful village of Kilmore Quay, Ros Tapestry, and a walking tour of Wexford Town.

Recent Projects include the launch of a new cookery book featuring Wexford Creamery products and four evenings of Opera in the Community with Wexford Festival Opera. This Opera project is continuing this year, with two evenings being held in Bree and New Ross. We also had a collaboration with New Ross Piano Festival Committee hosting two evenings of piano music to highlight their festival.