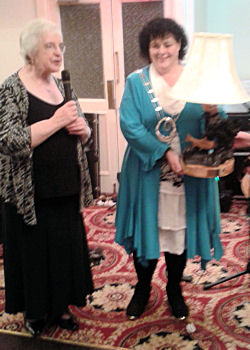 Wicklow Federation was founded in 1951. From the beginning drama has been our specialty. In the early 60s, when tasks were ‘farmed out’ to federations, Wicklow was made responsible for drama. The first One Act Drama Festival run by the federation was held in 1953. It must be one of, if not the longest running drama festivals in the country. The festival is now open to both ICA groups and community drama groups.

In January 2015 we celebrated our 60th Drama Festival. We began our celebration of this milestone in the history of Wicklow Federation with an official launch of the festival by our National President. The festival was a wonderful success and gave us the opportunity to remember the founder of the festival Gloria Mullalley and all the wonderful Wicklow members who kept the festival going through the decades.

In 2012 Liz Wall was the first Wicklow member to be elected National President. As she comes to the end of her presidency we want to say a huge thank you to her and congratulate her on a wonderful term of office as National President.

If you are interested in joining as a member of an existing Guild or in setting up a Guild in Wicklow you may contact either:

Federation President Susanna Braswell 0863696620 wicklowpresident@ica.ie
will put you in touch with a Guild that suits you.

Our activities include arts, crafts, produce and sport. We have demonstrations classes contests at Guild and federation level. We also organize a number of social events during the year e.g. an annual dinner and a summer social evening.

At federation and our Guild level we have a great interest and involvement in both local and national affairs.